Geodis Logistics, based in Venlo (NL), opened a new warehousing facility this year. The logistics provider opted for the most flexible layout and method of operations possible, in order to be able accommodate future developments as effectively as possible. Reach trucks equipped with reach forks helped achieve required warehousing levels.

REACH OUT FOR MORE

How do you fit 50,000 pallets in a warehouse in which modular dimensions have already been determined and in which the available space is actually too limited, while continuing to operate as flexibly as possible? ‘This is a situation in which you sit down with your supplier and meticulously examine all your options,’ says René van Boven, Projects & Engineering Manager at Geodis 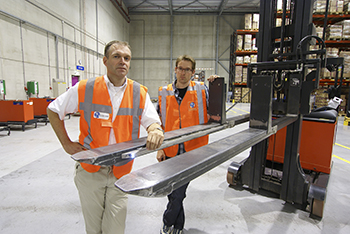 Logistics. ‘It was quite clear that a conventional layout just wouldn’t work for us. On top of which, there were various factors that made the choice even more difficult. It was quite a challenging puzzle.’

Geodis Logistics knows just how valuable it is to have a flexible layout with existing warehousing locations in Venray, Venlo, Rotterdam and Antwerp. Today’s customer is not necessarily tomorrow’s customer, which is why logistics service providers have to look farther than just today’s customers’ specifications. ‘Primarily, we didn’t want to be restricted by relatively low pallet weights,’ adds Michel Kil, Senior Logistics Engineer. ‘This was on average 400 kg. It’s tempting to opt for lighter weight shelving and forklift trucks. But we didn’t.’

Geodis uses Linde products as standard for all its European operations. Hence, the expertise of Almere-based MotracLinde was called upon to assist with the design of the new distribution centre in Venlo. The supplier worked together on optimizing shelving layouts and truck systems capable of handling 50,000 pallet locations. Using Logis and Stratos optimization software, every aspect of the new facility as well as Geodis’ requirements were examined. The layout is based on AR brand shelving systems supplied by MotracLinde. Options to accommodate both Euro and block pallet systems were taken into account when designing and placing the joists. Pallet locations are positioned flexibly enough that both pallet types can be used.

In various design sessions, modular dimensions, column positioning, lighting systems, heating units, roof purlins, emergency exits and fire equipment were all carefully analyzed. ‘This meant however that we lost between 2 and 3% of the available pallet locations,’ explains René van Boven.

The decision was made to use reach trucks in order to work as flexibly as possible with a minimum aisle width. ‘Unfortunately, the modular dimensions of this logistics facility were not designed based on 2.9 m wide reach truck aisles,’ explains Michel Kil pointing out the columns during a guided tour of the warehouse. Instead, these had been positioned on the basis of structural considerations. ‘They are positioned at 25 m intervals, whereas for logistics purposes a 22 m interval would have been a lot more logical.’ To maximize the number of pallet locations using existing intervals, MotracLinde and Geodis Logistics opted for a mix of single and double-depth shelving units. Double sections were placed where they fitted best, and then spread as efficiently as possible across the entire warehouse area to achieve an optimal storage mix. A number of reach trucks were fitted with KOOI-ReachForks ® in order to be able to access the double-depth shelving units. Given the customer’s limited pallet weights, it was not necessary to opt for a super heavyweight forklift truck. Nevertheless, Geodis decided on the 2-ton Linde R Series model. A heavy-duty mast was fitted on the R20S making it stiffer and better able to counter any deflection. ‘Don’t forget we’re working with increased load moments, so it does no harm to go for a more robust and stable system without sacrificing space,’ says Michel Kil. An optional, heavy-duty bumper also serves as a useful step. It also provides additional protection and counter balance, as well as giving the reach trucks a more rugged look.

CAMERAS ON THE LOOK OUT

A lot of attention was paid to safety as well as becoming accustomed to working with reach forks, as these were unfamiliar to many of Geodis Logistics’ forklift truck drivers. Principally, driving speeds are limited on reach trucks. To be able to see from a distance what is happening within the shelving units, two Orlaco cameras have been mounted on the reach trucks. One is positioned on top of the fork carriage and one on the inside, with line of sight along the right-hand fork. ‘Initially drivers were not that enthusiastic,’ adds René van Boven cautiously. “You can’t see anything and it takes too long,” they said. Nevertheless, we pressed on with the introduction and we let them practice for a few days using mock ups. We made plenty of time available for this. Ultimately, it turned out that double-depth shelving took a little longer to load and unload than a single-depth shelving unit, but certainly not twice as long.’

Practice makes perfect, and this will become routine very soon. Drivers orientate themselves using a number of factors – positioning in front of the shelving unit and the lowest pallet, the distance to the joist, fork extension and images from the upper camera. Using the camera positioned on the fork, it is possible to see whether the fork has been inserted perpendicularly into the pallet. On the colour monitor, it is also possible to double check location codes. Michel Kil, ‘In practice, picking up pallets turns out to be trickier than placing them. Because we’ve put down decking under most of the double-depth sections, there’s not a lot that can go wrong when placing pallets.’ 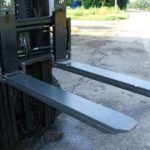 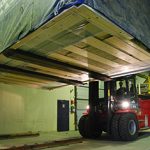