Harrells Fertilizer, formerly WILBRO Fertilizer, is a long time user of the KOOI-ReachForks. In the mid 90’s WILBRO came to Southland Equipment Service, Inc. with a storage problem and looking for help.

Harrell’s is a leading producer of quality custom blended fertilizers and a distributor of chemicals and grass seed for the golf course, sports turf, lawn & ornamental, and horticulture industries. Established in Lakeland, Florida in 1941, Harrell’s production of fertilizer exceeds 75,000 tons annually. The products are shipped all around the eastern United States, across the Caribbean, Central and South America, the Middle East and along the Pacific Rim. Harrell’s is the exclusive eastern formulator and a leading world distributor of POLYON® Technology, the industry’s best controlled-release fertilizer technology.

Harrell’s had an existing cotton warehouse which had two levels and a steep concrete ramp transitioning from one room to the next. They needed to stack pallets of bagged fertilizer but could only stack two high on the floor and were unable to utilize the high ceiling space. They also had a narrow space which would only allow for one working aisle but needed double deep rack to make the project work and meet their storage needs. Narrow aisle equipment would not work as it could neither transition the concrete ramp nor travel outside across the ground when needed and the power needed for the charger was not in place. They did not want to build a new building but it appeared that was their only choice. Upon Contacting Henry Richardson, Material Handling Specialist of Southland Equipment he advised Harrell’s to use the hydraulic extension forks, also known as KOOI-ReachForks. Southland Equipment sold them a new solid pneumatic TCM LP diesel powered forklift as that is the fuel all of their other equipment uses and it put out less carbon monoxide than LP Gas with a sideshift and a set of KOOI-ReachForks along with a double deep storage rack system allowing the customer to use his existing building and saving them the expense of new building. Additionally, the customer was not reliant on one specialized machine as the telescopic forks could be moved to another forklift in their fleet in the event they had a problem with a forklift due to the corrosive environment they operate in. Today they are using two sets of KOOI-ReachForks and the same cotton warehouse. 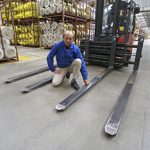 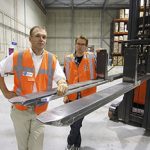