Venlo, the Netherlands – The groundbreaking Rollerforks® save space, money and time for Teijin Kasei Europe. The palletless handling of flexible intermediate containers, or FIBCs, has become the most natural thing in the world.

The distinctive sound of the Rollerforks has become music to the ears of manager Maurice Beurskens. He can now watch as driver Ferenc Beelen unloads two FIBCs at a time using only a synthetic slip-sheet under the load rather than a conventional wooden pallet. Goods are unloaded and handled more efficiently – pallets are now used for internal storage only.

A LOT OF DAMAGE AND MALFUNCTIONS

The use of push-pulls was seen as a necessary evil because there was no other option available at the time. “Lift truck drivers had to learn to work with it. Moreover, two trucks were needed; one equipped with a push-pull and one with standard forks for transporting a load to our temporary storage. The second driver often had a long wait while FIBCs were placed on pallets.” Similarly time was lost due to problems with the push-pull. It appeared that the irregular shape of the FIBCs work well with the push-pull equipment. Cylinders broke, steel deformed and repairs had to be carried out regularly. “The unloading of the containers was slowed down and costs increased,” emphasizes Beurskens. “This was not only due to the weekly repairs, but also because drivers accidentally damaged the packing of products during handling operations. In order to prevent all possible product impurities we have to reject damaged FIBCs and recycle them. This is big waste of money taking into account the market value of one kilogram of high-quality polycarbonate, which is approximately €2 / €3.”

Teijin Kasei Europe was informed of the introduction of MSE’s Rollerforks® at the 2003 Logistica Exhibition. It was here that the new product received the Logistica Innovation Award. Soon afterwards it also won the Innovation Award from the Metal Union. The principle of the Rollerforks® is as simple as it is ingenious. Each fork is equipped with 2 layers of rollers that are able to move vertically. But it is the opposite direction of rotation that makes them so special. The lower rollers move over the floor and by doing so make the upper rollers rotate, but in the opposite direction. As a result the load is moved along the forks by the upper rollers. The system has already been shown to work for a variety of loads. “We have been using Rollerforks® since March this year, after a successful test.” ends Maurice Beurskens. “The drivers were able to use them straight away and it is a fast way of handling. We reduced handling times by at least 30%. This matters when you have to unload dozens of containers every week. We are also able to do all the work with just one lift truck. The Rollerforks® can be used as standard forks as well. The sound of the rollers reminds me of the good choice we made.” 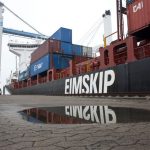