By bringing in the RollerForks, cocoa producer Dutch Cocoa cleverly solved an internal transport problem. The fork with rollers is ideal for the transferring of pallet loads from the synthetic hygiene pallets onto the wooden distribution pallets. With a minimum effort, Dutch Cocoa gets a maximum output.

In the production plant of Dutch Cocoa in Amsterdam it unmistakably smells of cocoa. The grinders run almost continuously so that our worldwide clients can be supplied with the desired cocoa blend and quality. From the elevated office section, the view on the production is splendid. “The beans first go through a cleaning process and then we break them in order to separate the kernel and the shell, and then we roast the kernel according to a previously set method of preparation”, explains Planning Manager Danny Rolvink, pointing through the window that hermetically separates the production room from the rest of the company. “Then, the beans are grinded into a liquid mass. In tankers, this goes to the client, but we can also press it into cocoa butter or cakes that at their turn are grinded into powder. This depends on what the client wishes to achieve.”

Dutch Cocoa also has other packing variants in their assortment. The powder is also packed into fibc’s (the large bulk sacks) or in 25 kg sacks. Apart from that, the company produces ‘flakes’ that especially appeal to smaller producers because the portions of cocoa are much easier to dose and melt down. A final variant concerns the consumer packages and units for ‘Instant Drinking’, that is the chocolate beverages from machines.

Whatever the ultimate goal of the cocoa bean is, at Dutch Cocoa they all pass the red and white departments that are strictly separated for the production process. The red department concerns the logistic supply and transport routes. The white department is the actual production process in which the highest requirements to hygiene in accordance with the strict HACCP standards are applied. After all, we are dealing with foodstuffs. All cocoa is put into sacks in the white department. The larger sacks are then palletized in the red department. “For this purpose, we use normal Euro pallets”, says Danny while a steady flow of sacks rolls towards the palletizing robot. “The bottleneck for us was the transport handling of the smaller packing variants, such as the consumer packages. These smaller packing variants are palletized at the white department, but in order to comply with HACCP and ISO we are not allowed to use wooden pallets for this. That is why we put the products on expensive synthetic pallets, however we do not want to use them for the external transport. With their price of dozens of euros each they are just a bit too expensive.”

Of course, Dutch Cocoa could manually transfer and stack all boxes onto the wooden pallets. In view of the labour cost that was not an obvious option and besides, according to the Working Conditions Act this is not very good for our employees. A pallet turner might bring relief, but it requires more manoeuvres. Danny Rolvink: “In a roundabout way, we tracked the RollerForks down. We saw the short video on internet and were definitely surprised by its simplicity and functionality. After a few reference visits we were sure: we can certainly make chocolate (head and tail) of it.”
In the white department, the smaller packages are placed onto special synthetic RF-pallets. The pallets have an extra set of synthetic slats on the upper deck and the RollerForks fit perfectly between them. By first laying a cardboard slip-sheet on the pallet, the forks later roll effortlessly under the cardboard and in fact, it does not matter what the size of the stacked boxes is.

While Rolvink explains the system, a synthetic RF-pallet is supplied from the warehouse via the hygiene sluice. Warehouse manager and forklift truck driver Jan van Loon gets his forklift and sticks the RollerForks in the openings under the cardboard slip sheet. The tapered forks are equipped with two rows of rollers that are above one another. Upon contact with the floor of the work space, in this case the deck of the synthetic RF-pallet, the upper rollers turn into the opposite direction of the fork movement. This way, the load is smoothly picked up onto the fork. While Jan lifts the load and releases it from the RF-pallet, the rollers drop and the load rests stably on the fork. Danny Rolvink: “And during the placement onto the wooden pallet, exactly the opposite principle occurs. Look, while withdrawing the fork, the load easily rolls from the fork. Now we can use the RF-pallet again for the next load. The wooden pallet goes into the lorry. Thanks to the RollerForks, the switching has really become a piece of cake.” 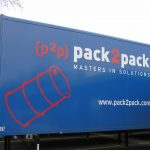 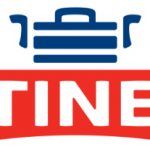