Increasing numbers of tea and coffee producers have discovered the benefits of using slipsheets and RollerForks in combination. For example, many South American and African tea and coffee exporters are already shipping their products to Europe in sackcloth on slipsheets.

Pallets take up a lot of space and are expensive. Wooden pallets have to comply with ISPM 15 directives. ISPM 15 compliancy is forcing up the price of wooden pallets and presents a health hazard because of the toxic gases that that may still be present after treatment. This is hazardous for goods packed in sackcloth, as well as to the health of the workers unloading the containers. To avoid having to use pallets treated with chemicals such as methyl bromide, plastic pallets then need to be used. These are generally even more expensive than specially treated wooden pallets. It is therefore far simpler to ship tea and coffee in containers on slipsheets. RollerForks are ideal for this purpose, as exporters in this market segment often have multiple customers.

If all these customers were then forced to invest in a push-pull unit, then the concept of palletless shipping would encounter a great deal of resistance due to the high costs of such a unit. RollerForks are cheaper in comparison, can be used for regular pallet handling and moreover, they do not require a hydraulic system, which means that they are HACCP-compliant. Containers can of course be loaded and unloaded manually in countries where labour costs are low, but this is unacceptable to recipients in the West because of the harsh working conditions this imposes. 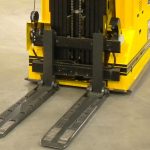 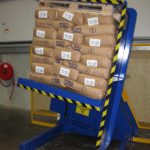