Milk powder manufacturer Vreugdenhil has chosen RollerForks for the loading of containers without pallets. Thanks to the purchase of three sets the loading of sea containers in Scharsterbrug, Gorinchem and Voorthuizen will go like clockwork as of now.

For dozens of years already Vreugdenhil has belonged to the most important international suppliers of milk powder and other dairy-based specialities for the foods industry. That the variation is enormous becomes obvious during a tour through the warehouse in the Friesen Scharsterbrug. Many pallets with all sorts of powder products tightly piled up are ready for shipment to customers worldwide. “Officially, we talk hereby of spray-dried dairy products” says the head of dispatch Watze de Boer enthusiastically. “Our milk powders and specialities are, among other things, processed by companies in the dairy, chocolate, ice-cream and the pastry industry. Recently we have even started with the production of instant milk powder products in consumer packs.”

To obtain as much yield from the transport as possible, more and more clients ask Vreugdenhil to not deliver pallets along with the bagged goods in the containers. In order not to have to load the 25 kilogram bags manually sales manager Klaas Muda van Vreugdenhil had a look around on the Internet. “He found the RollerForks on the site of Meijer Special Equipment (MSE)”, indicates Watze de Boer when the fork-lift truck with the special forks drives up. “On the site there are various examples, among which the loading of bagged goods in sea containers by the colleagues of Jonker & Schut. When looking at this we were already so captivated that we made an appointment with Jonker & Schut. When seeing the RollerForks and the enthusiasm of Jonker & Schut we asked MSE to give a demonstration of the RollerForks in Scharsterbrug in order for our fork-lift-truck drivers also to be able to try out the RollerForks. De Boer says that the demonstration of the RollerForks already made an impression as from the moment of assembly. Within just a few minutes the forks were mounted on the existing fork-lift-truck because no special requirements are made to the fork-lift-truck. Thus no extra hydraulic valve is necessary to be able to work with the system.

For the demonstration a special RollerForks Pallet (RF-Pallet) was loaded with bagged goods. The RF-pallet has an extra opening on the upper deck in which the fork can be inserted easily. To carry the cargo a simple piece of cardboard was used as a slip-sheet. Watze de Boer: “To be honest, I wondered whether that cardboard would be strong enough. I had especially saved some original slip-sheets from our Nestlé era when we still used a push-pull. According to the explanation of MSE it would be possible without a problem. I now also know why: after all, the RollerForks move almost without any friction under the corrugated cardboard thanks to the extra created opening in the pallets. The bagged goods are divided onto the two RollerForks and the load between the RollerForks rests on the corrugated cardboard which can easily carry this load.”

After the demonstration, which went extremely well, Vreugdenhil ordered three sets of RollerForks for its three establishments. For the establishment in Scharsterbrug also ± 100 RF pallets where purchased from a pallet producer. By using the RollerForks in combination with the RF-Pallets Vreugdenhil saves money in two ways, thus proven during the loading of the container with the RollerForks. Corrugated cardboard is considerably cheaper than original slip-sheets. Nevertheless Watze de Boer expects that for supplies to countries such as America and Australia the original slip-sheets must be applied. “Also in those countries the labour costs are high and they might also want to unload with RollerForks” he explains. “It is clear that a saving on labour costs catches the eye mostly. For each container we had to sub-contract three men for two hours. With the RollerForks the total investment is earned back rapidly. The Dutch Ministry of Economic Affairs also gives a subsidy of 10% on the total purchase value of the RollerForks (FARBO) which is also a nice extra. For this reason I will certainly recommend the system to our customers. Not only because of the savings, but also the ease with which the driver works is definitely convincing.” 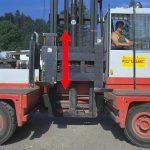 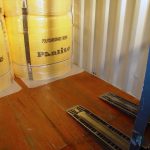