THE GOAL IS TO ELIMINATE USE OF WOODEN PALLETS AT ALL DCS BY 2011.
IKEA is testing a new palletless decking system which would completely eliminate the need for wooden pallets throughout its network of 31 distributions centers worldwide.

If trials at two of its DCs prove successful, the system would save the furniture retailer tens of millions of dollars in pallet costs.

Designed by staff at IKEA’s 1.5 million square foot distribution center in Savannah, Georgia, the new system allows product that is shipped on plastic and cardboard slipsheets with one-inch ‘feet’ to be stored on modified storage racks which allow access by traditional forklifts.

If early successes are confirmed, the system would accomplish IKEA founder Ingvar Kamprad’s stated goal of eliminating the use of wooden pallets in all IKEA warehouses by 2011.

Not only are the slipsheets recyclable, but they’re provided by IKEA’s suppliers at a cost ranging from $1 to $3 each, as opposed to the $17.50 for Euro pallets (800mm x 1200mm) and $24 for longer standard IKEA pallets (800mm x 2200mm). IKEA gains a further benefit by not having to transport heavy and bulky wood pallets on return trips from the DC.

The $2.4 million investment to kit out the Savannah distribution center had to be approved by IKEA’s executive board in Sweden. Considering that the DC spent $3.4 million last year on wooden pallets, return-oninvestment is anticipated in less than a year.

“We haven’t bought a pallet for this facility since the system went in,” says DC manager Ed Morris, who led the project. “It has been positive in all aspects so far. We’ve experienced lower damage, and while picking and putaway are about the same, there are significant time-savings in receiving and shipping.”

Racks were manufactured for 80,000 addresses, each of which can accommodate three pallets, side by side. The design is remarkably simple, consisting of three tribend steel plates that support the slipsheeted product. Morris says they went through five or six iterations before they found the right configuration.

“The system originated from a simple desire to store products without the use of pallets, to avoid the cost,” says Jim Leddy, North American expansion manager at IKEA’s Distribution Services Group in New Jersey. “Essentially, the rack supports that are traditionally found on the underside of a deck were placed on the top side, allowing the same strength and stability with added functionality.”

The system is also being tested, with a few modifications, at IKEA’s “Shanghai 2” distribution center. Once the testing period has concluded, the palletless decking system will be assessed by IKEA’s Global Warehouse Logistics group in Dortmund, Germany. The group, which develops all warehouse concepts for IKEA, is investigating a number of ways to remove wood pallets from the company’s supply chain. Measurements are likely to include overall cost, sustainability, product life cycle, and operational impact.

“In the end, a solution that works best for the entire supply chain will be chosen,” says Leddy. William Jackson, Savannah’s DC
operations manager, worked closely with his employees in introducing the system.

“Depending who you’re talking to, you get different levels of interest when you introduce a new system,” he says. Concerns included the potential for the sharp metal edges on the risers to scratch or injure warehouse workers (Shanghai-2’s risers have rounded edges for that reason).

Jackson worked with a training team to develop effective putaway and picking procedures using test loads. They discovered that some slip sheets don’t fit as well on the risers. Some were too narrow to fit squarely, others were too wide. They also discovered that they lost some productivity time trying to make eccentric pallets fit properly.

After working out some of the bugs and eliminating major problems, they took it to
the rest of the warehouse team.

“If it is adopted company wide, suppliers will be told that in order to be successful with IKEA, you’ll have to provide slip sheets to these dimensions,” says Jackson.

If all goes well, IKEA will have removed wooden pallets completely from its supply chain, something Ingvar Kamprad began to discuss in 2007.

“This is not a purely financially driven idea,” says Leddy. “IKEA has a very large commitment to the environment and reducing wood from our supply chain has quite an environmental impact. The reduction of wood allows for greater fill rate in trucks, reducing the number of trucks needed to move product. No wood also means we don’t have to transport empty pallets from stores, DCs, or suppliers. And, of course, the obvious benefit of not cutting down trees to make the pallets in the first place.”

IKEA began operations in North America in 1985 and now operates 43 stores in Canada and the United States. 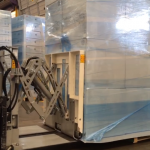