IHB (Industrie & Handelmaatschappij Bergschenhoek BV) is named after the town where it is located, Bergschenhoek (NL). Its beginnings date back to the Hercules NV concrete factory founded in 1956, but officially changed its name in 1965. In 1970, the company started producing spiral ducting, and in 1978, it opened its first branch in Mierlo (NL). In 1979, production of concrete products was finally discontinued. In the years that followed, the company expanded rapidly setting up a manufacturing company in Staphorst (NL) in 1983, and opening a further two sites in Amsterdam and Barendrecht (NL) in 1998 and 2001 respectively. This led to the current-day total of five company sites. The Bergschenhoek Group’s primary objective is to supply high-quality, standards-compliant products based on sound and proper technical advice and expertise.

On 01 September 2008, the company completed construction of its new warehousing facilities at its Staphorst site. The facility covers some 2,500 m² (26,900 sq ft) and makes production and delivery at the Staphorst site more efficient, as well as serving as a central distribution centre for the other four sites. “Before the new warehouse was built,” explains Henk Mulder (Staphorst Site Manager), “we were just a manufacturing site. It was often the case that we would receive an order from a certain site to manufacture several items and then receive a subsequent order only a few days later for the same item – just as the first order had been finished and the machinery had been retooled. This used to cause major upheaval on the shop floor as well as in the offices and resulted in very low efficiency levels. That’s why we carried out studies several years ago to address our order flow and logistics, both internally and externally. This study revealed that we’d be far better off building new warehousing facilities and delivering from inventory rather than to order. At the same time as we were building our new warehouse, we also decided to tackle routing of our production processes and apply Lean practices. We’re still in a transition phase with this deployment, relocating various pieces of equipment and purchasing more efficient machinery. In a few months’ time, our production line will be finished and products will begin to flow into the warehouse with only minimal handling required.”

“We pick up the finished products from the production line with one of our two Caterpillar reach trucks, model NR16N, and place them directly in their storage locations in the warehouse.

This reach truck is fitted with a MSE-Forks CDHSS mast extension system. This system was mounted on our forklift truck fairly easily by our dealer and gave us an additional lifting height of 0.5 m. We needed to purchase this system because we have low overhead cranes in production areas, but goods need to be stored up high in the warehouse. There’s also limited headroom between the production area and the warehouse. Standard forklift truck masts would be too tall to clear the portal cranes and make it from the production hall to the warehouse. Our Caterpillar dealer, Crepa, brought our attention to the MSE-Forks CDHSS mast extension system, and after close consultation, we decided to purchase the system. Therefore, we can now use a shorter mast in combination with the mast extension system to carry out operations in the production hall and warehouse without the need for any structural alterations. Moreover, the CDHSS frame doesn’t obscure the driver’s line of sight and only requires one extra hydraulic function.” According to Marco van Enteren (forklift truck driver), “It’s a perfect system… principally because it’s easy to operate and doesn’t adversely affect forklift truck manoeuvrability. In-built synchronization also means that the forks can be accurately raised and lowered in tandem, which is essential for safety.” 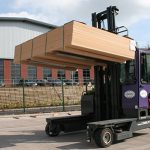 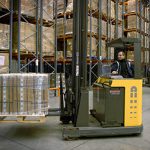