PBS Food BV specialises in – amongst other things – the packaging and storage of dairy products in powder form, including powdered milk and baby food.

For 35 years now, quality, flexibility, reliability and efficiency have been top priorities for PBS Food BV. Whether it concerns storage for several weeks or months, large quantities of bulk goods or smaller batches of packaged goods, PBS Food has the solution for nearly any storage problem. With two locations at Haulerwijk and Heerenveen in the Netherlands, PBS Food has plenty of storage space.

As well as storage and transshipment, PBS Food specialises in repackaging. The repackaging is carried out carefully and efficiently, entirely in accordance with the customer’s specific wishes. Goods and products delivered in bulk are packed in any desired quantity. Conversely, the company can take batches of packaged goods and convert them to a bulk shipment. Special facilities are available for this and it goes without saying that hygiene is a top priority in order to conform to the strict regulations in this field. PBS Food is one of the few companies in its sector to be certified by “Halal Feed and Food”in The Hague.

PBS Food is a well-known name in the dairy sector, both in the Netherlands and further afield. Many of its customers are multinationals and/or trading companies. As in all sectors, prices are under pressure and ways to reduce costs have to be sought. Among other areas, PBS Food has had a major success with the handling. 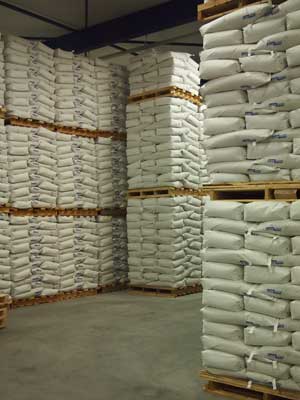 All the bagged products used to be loaded into containers on pallets, but PBS Food has revised this practice. Manager Jelke Nijboer quickly identified the pallets as an enormous expense. It was
not only the cost of buying the pallets, but also the associated administration, such as ordering on time, keeping them in stock and maintaining them in good condition to ISPM 15 standards. They looked for a flexible solution to get the loads into containers without using pallets, but also without additional handling or use of forklift trucks. The solution for PBS Food was a set of RollerForks®developed and produced by Meijer Handling Solution former known as MSE-FORKS, suitable for either slipsheets or pallets.

The RollerForks are entirely mechanical and, says Mr Nijboer, this is very convenient for the food industry as any risk of leakage from hydraulic systems must be avoided. The RollerForks work superbly, although we did have to convert some hundreds of pallets into ‘RF’ pallets. In our case, this is our standard 1100 x 1350 mm pallet with an extra layer of beams into which the RollerForks can be inserted. This is a one-off investment, because the pallets stay on our own premises and no longer come into contact with dirt from external sources. As an outsider, you might think that adapting internal pallets would cost a lot, but it actually costs surprisingly little. The ROI is quite fast because you are very flexible as the producer and the one who dispatches the goods. The combination of RollerForks and RF pallets makes it possible to take up the load (bagged goods and FIBCs) on a piece of corrugated cardboard, which costs a fraction of the price of an original slipsheet. This would not be possible with a different extension, such as a Push/Pull.

Depending on the destination, most customers now receive the consignment on corrugated cardboard. In the meantime, we also have customers who specifically ask for slipsheets because they
don’t want to unload the container manually, as you have to do with corrugated cardboard. If the customer wants the consignment on slipsheets, we fill the palletizing machine with RF pallets and the slipsheets (solid cardboard or plastic) are positioned on the RF pallets using a system of sucker cups. The customer requests and we respond, you might say. With the introduction of the RollerForks, PBS Food has made a major advance in efficiency while remaining flexible in the delivery of consignments, whether on pallets, corrugated cardboard or slipsheets. And finally, we can also make a considerable contribution to the environment, which is an important factor. 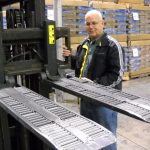 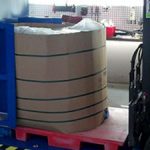